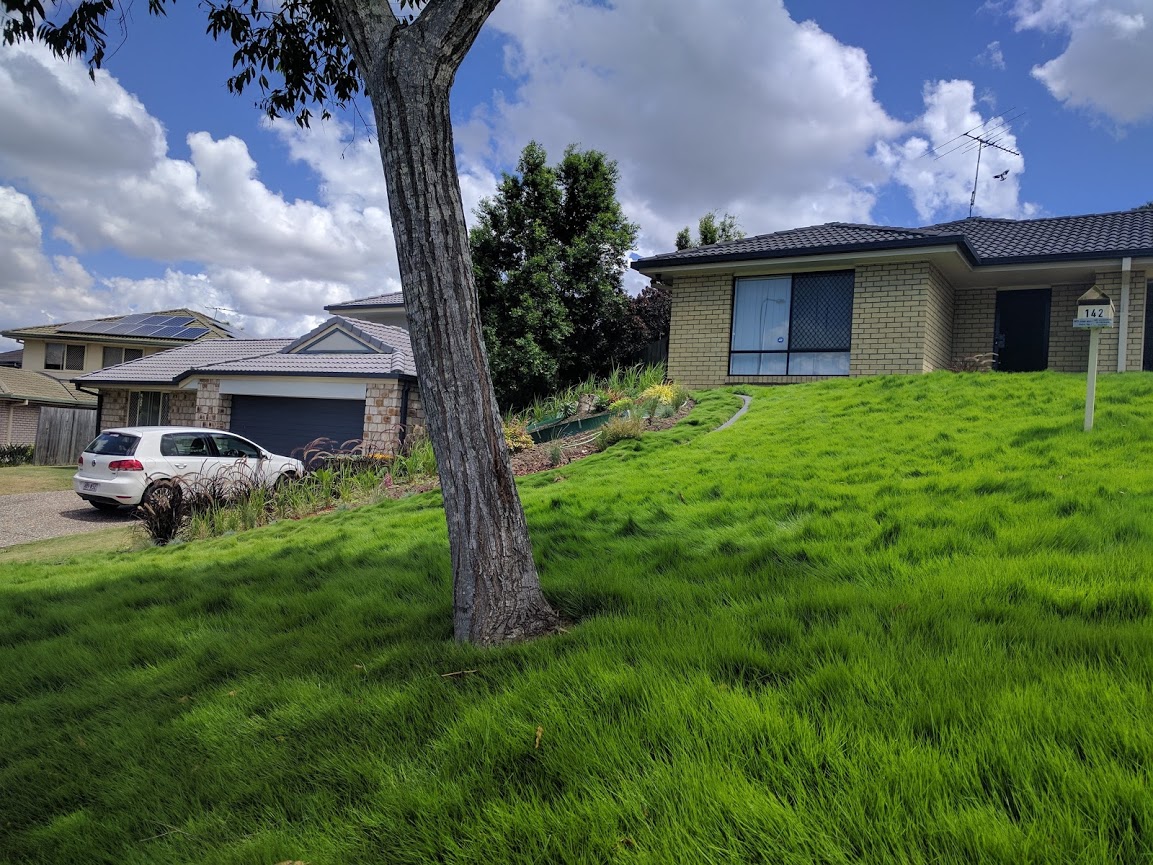 I love Zoysia matrella and I love it’s natural forming waves, particularly on a sloping site such as the one in front of my house. People slow down with their cars to look at it, sometimes stopping completely getting out and touching it, checking to see if it’s real. When they ask about mowing I say it’s a no-now lawn! This is true, in a sense, but that doesn’t mean it’s any less work than a typical turf. At contrary it’s perhaps more demanding in terms of proper management. 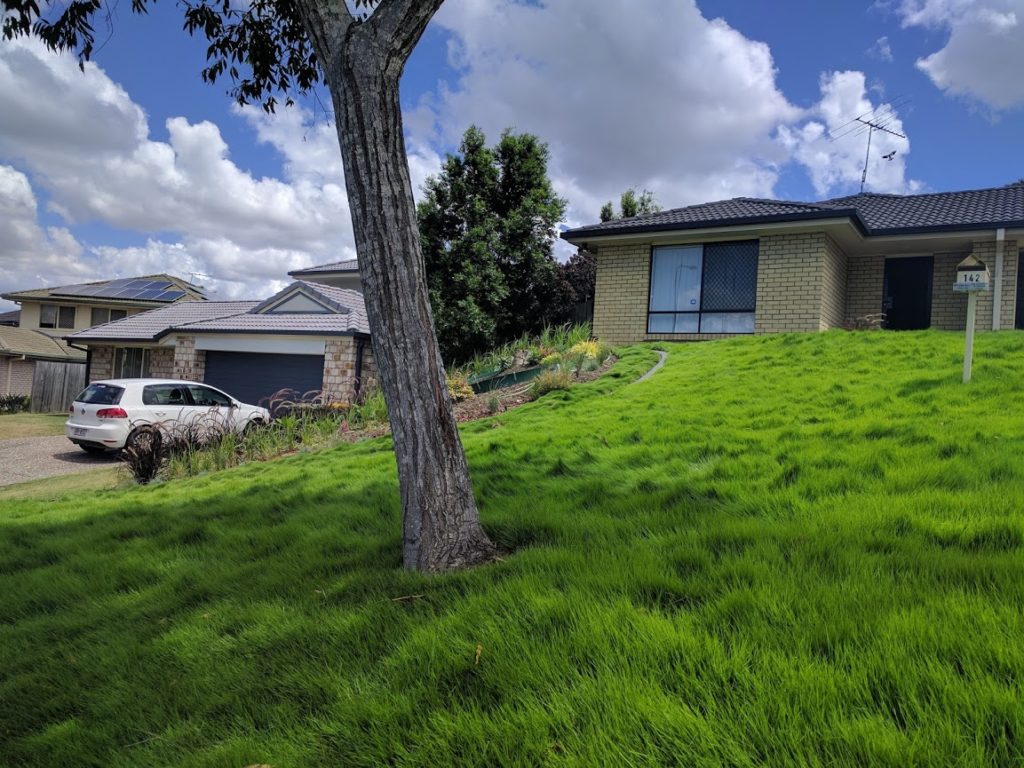 The main problem with Manila Grass is that if you don’t mow it for more than six months you can’t mow it at all after that. The layer of thatch under that wonderful top thickens so much that if you mow the green healthy grass blades, all that is left is dead matter, roots and some rhizomes. Recovery from that situation takes a full season and it’s not guaranteed it will bounce back completely.

I did that as a test in my other property and found permanent patches of dead lawn after mowing. I waited about 3 months to see progress and ended up replacing the lot instead of attempting to repair it. 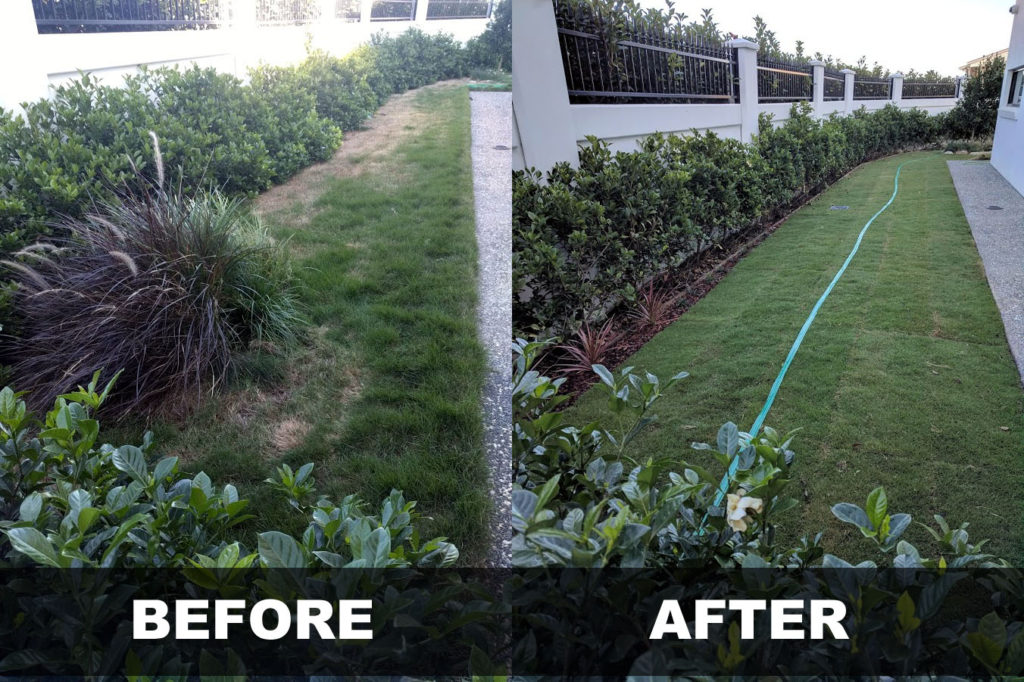 So why mow it at all?

Well, all that thatch under the beautiful grass top provides moisture-retaining fungus-breeding environment which becomes particularly problematic in cold and wet winter season. It tends to manifest as sporadic yellowing of random large areas of the lawn, particularly those with more shade and moisture. Shorter grass allows the sun to penetrate the lower layers of the grass, discouraging fungus growth.

After allowing my grass to beam in all its glory for about 6 months, I decided it was my last chance to mow as winter approached. It was now or never situation, I knew that much. I set the mower to the highest possible setting and just went over the lot and hoped for the best. 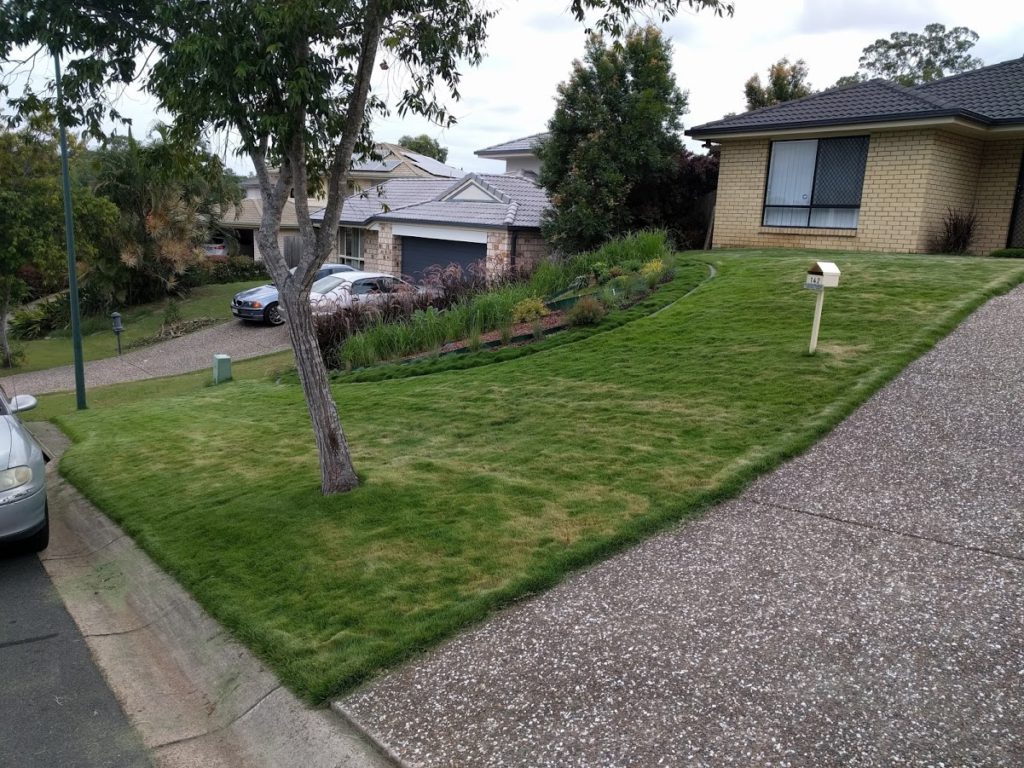 The next day the dead, dry grass really started to show and I decided to de-thatch the whole area using my rakes. While doing this I uplifted quite a few rhizomes which weren’t so happy being exposed to the sun and ended up drying within a week or two. I had to remove them one by one as they were quite unsightly. I don’t know what I could have done differently other than shallow de-thatching. 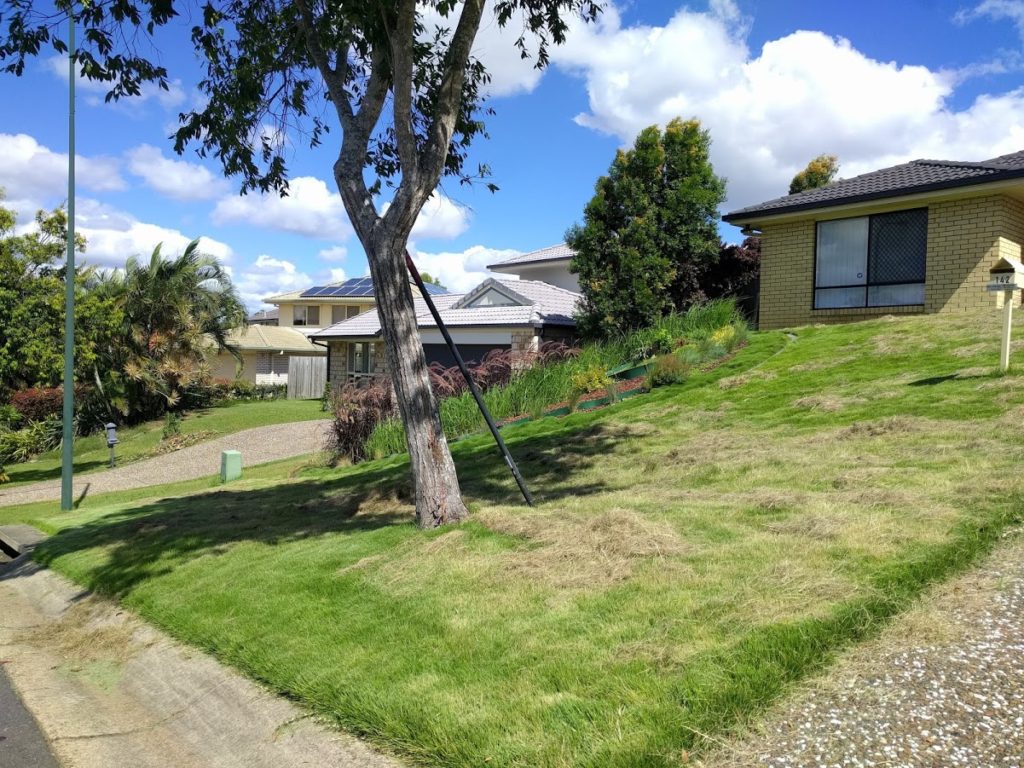 Two days after that, the whole lawn started yellowing, perhaps in shock, I mean it just lost most of it’s chlorophyll containing powerhouse. 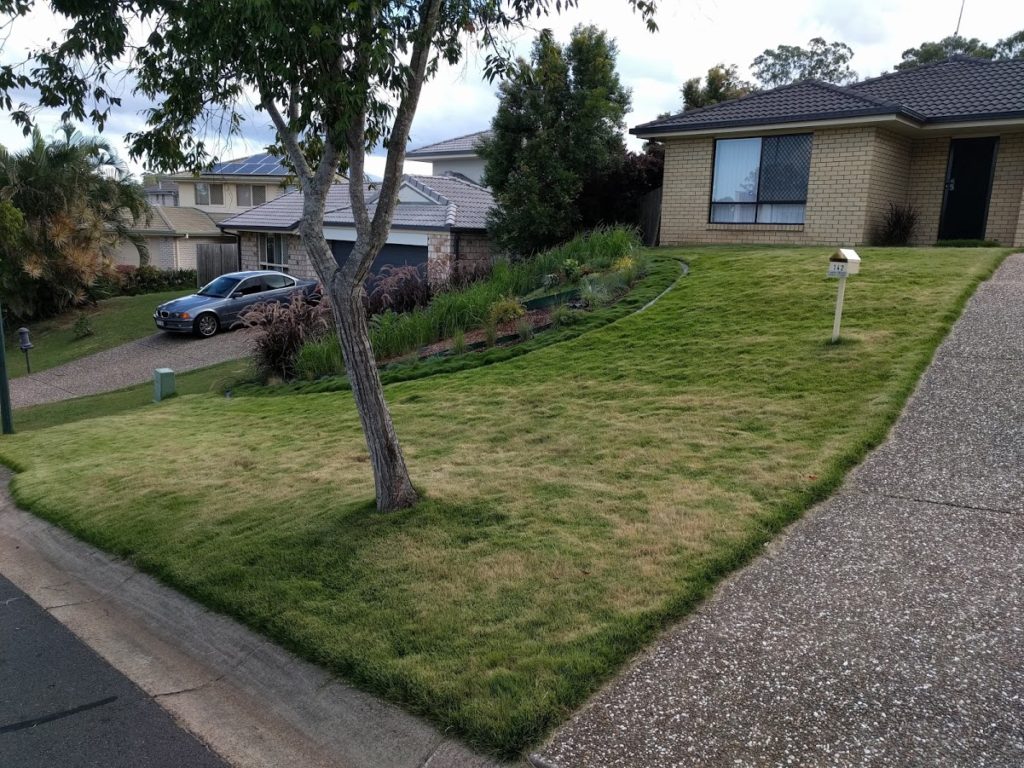 Two days after that I applied some rapid greening liquid fertiliser and I kept the lawn well-watered in hope it would recover faster. 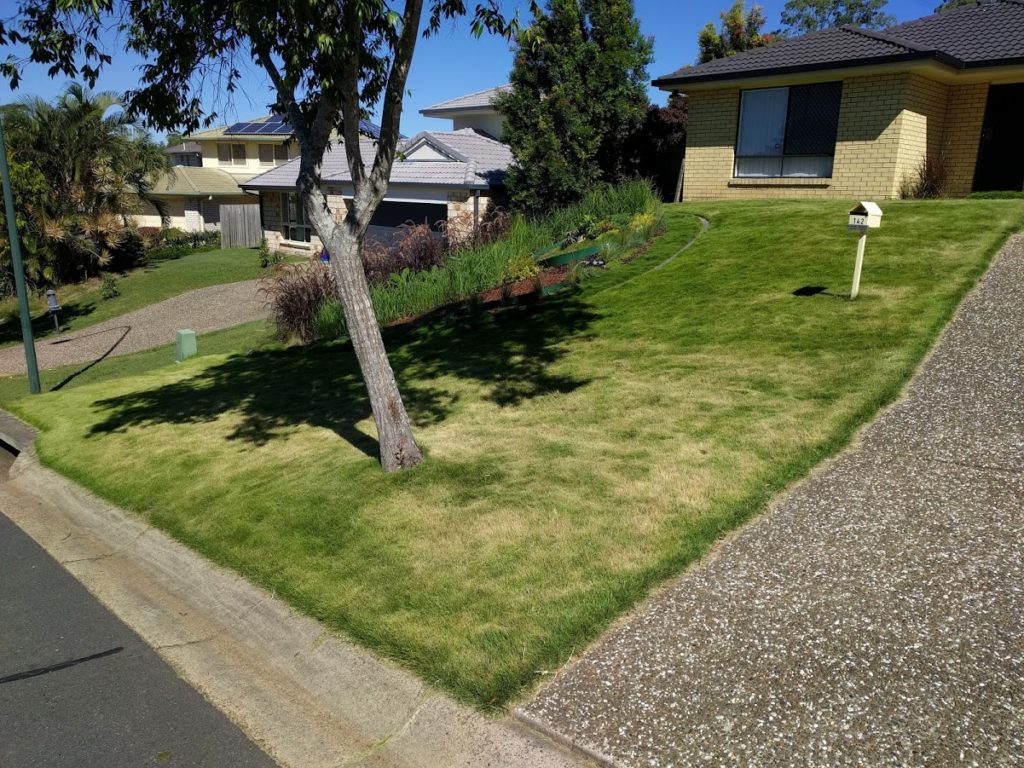 It took about a week from for me to see some improvement: 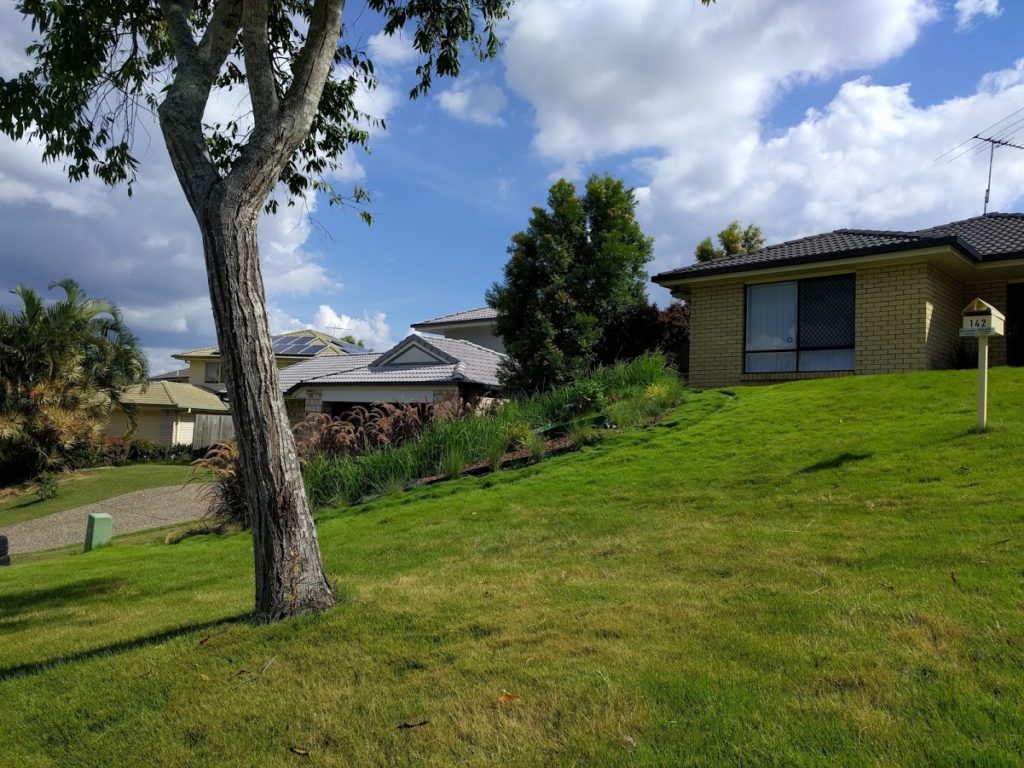 Nearly a month later, it’s doing OK, but nowhere near it’s old glory. I’m not too concerned, it’s winter in Brisbane and Zoysia matrella is a tropical grass which thrives in warm, sunny climate. I will post photos once we’re in summer to show how it’s recovered. 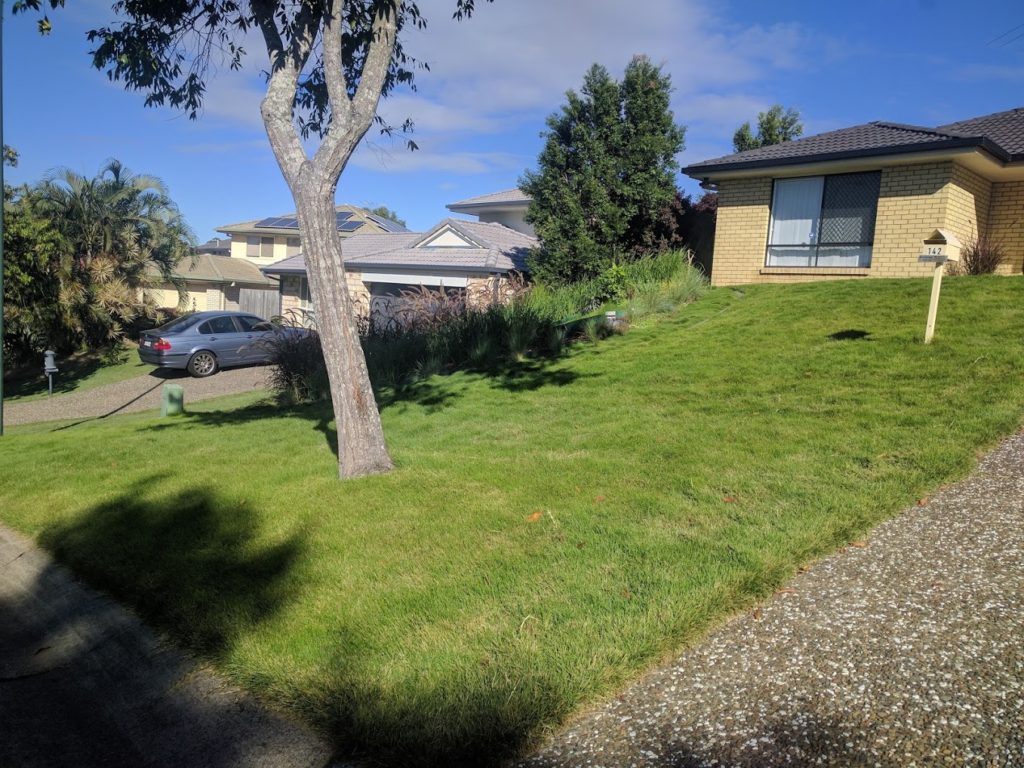 I plan to mow again, just a small test area, but from observations so far, the green didn’t penetrate the lower layers after mowing. The greening effect you’re seeing in the photos is grass simply reclaiming its old height. If I had to guess, I’d say I should have been mowing this grass regularly immediately after it’s been established. Now I’m stuck with a drama queen.

I better stock up on fungicide.